A Guide to Fused Filament Fabrication

Affiliate Links are present below.

The extruder is the defining characteristic of FFF 3D printing. There are other types of additive manufacturing (e.g. stereolithography, inkjet printing, etc.), but the way in which the extruder heats and liquifies a thermoplastic before depositing it on the build platform is what makes this printer a FFF printer. There are two functional parts of an FFF extruder: the hot end, which softens and liquifies the plastic filament, and the extrusion drive, which forces filament into the hot end. At the risk of overcomplicating this simple mechanism, I would like to point out that the solid filament that enters the hot end acts as a piston forcing the filament that has been melted out of the nozzle. The plastic that exits the nozzle will be called the fiber. The fiber is deposited in a layer-by-layer process by the system of linear rails and carriages to form 3D geometries. We will take a closer look at the components that make up the extruder, but if you start to get confused just remember the extruder is nothing more than a glorified hot glue gun.

The the hot end (also spelled as HotEnd) is an aluminum block that is heated by a ceramic heater cartridge. The heat produced by this component will lower the viscosity of the filament (i.e., melt it) so that it can be extruded out of a nozzle. Commonly available hot ends can comfortably reach temperatures north of 250C, so it is always best practice to never touch the hot end even if the printer is turned off. Each printable thermoplastic has a narrow temperature range where it exhibits the best properties for printing. If the hot end is below the melting temperature of the plastic then it can’t be extruded. On the opposite end of the spectrum, if the hot end is too hot, then the molten plastic will either burn or have too low of a viscosity to be properly deposited onto the build platform.

The cold end is directly above the hot end and typically has cooling fins and a fan. The presence of a cold end can seem counterproductive to the main function of the extruder, which is heating the filament. For people new to 3D printing, the extruder not only has to eject filament on demand but also has to retract filament in order to move to unconnected features or parts on the build platform. The longer the distance of preheated filament the less responsive the extruder will be and the more likely the extrusion drive is to jam. The cold end minimizes the amount of molten filament.

An important and often underrated component is the heat break, which divides the hot end from the cold end. This part has a low cross-sectional area that restricts heat flow from these two components. Heat creep is when too much thermal energy makes it past the heat break allowing filament to melt in the cold end. Heat creep is typically an inherent issue with an extruder design or the use of poorly manufactured parts, such as those often used in clones, but reducing the printing temperatures can help.

The nozzle is the last part of the extruder the plastic touches before being deposited on the build platform. The molten plastic exits the nozzle through a small pin hole of a defined diameter, ranging from 0.25mm to 1.00mm (for standard flow extruders). The extruded fiber takes on the diameter of the pin hole, and higher resolution prints can be achieved by using nozzles with smaller pin hole diameters.

When selecting a nozzle, the other important consideration besides the pin hole diameter is the material the nozzle is made of. The cheapest nozzles are made out of brass because brass is soft and easy machine, but this softness results in low wear resistance. Composite filaments containing hard and sharp particles like carbon fiber and sand will eat away at the inside of a brass nozzle, increasing the size and irregularities of the pin hole. To print these erosive plastic composites its best to use a hardened steel or even a gem-stone tipped nozzle.

To change a nozzle you have to unscrew it from the hot end. Fortunately, almost all nozzles follow the “RepRap” style and use an male M6 x 1 thread. Nearly all modern extruders have hot ends with the female version of this thread. This makes it easy to shop nozzles from different vendors and manufacturers.

There are a lot of different extruders on the market, but three designs stand out: V6, Dragon, and Mosquito. Read about the pros and cons of each model below. 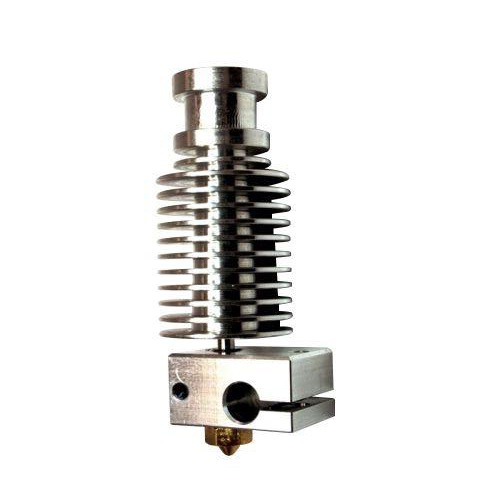 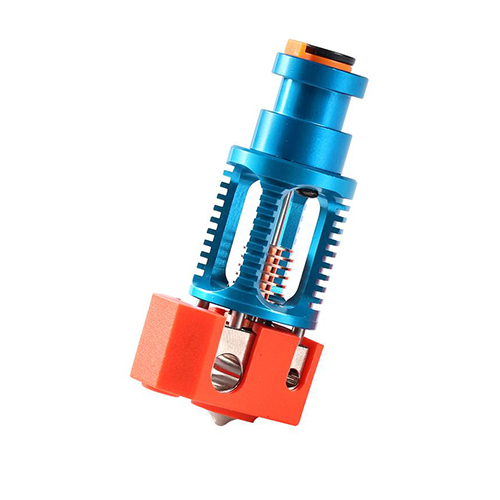 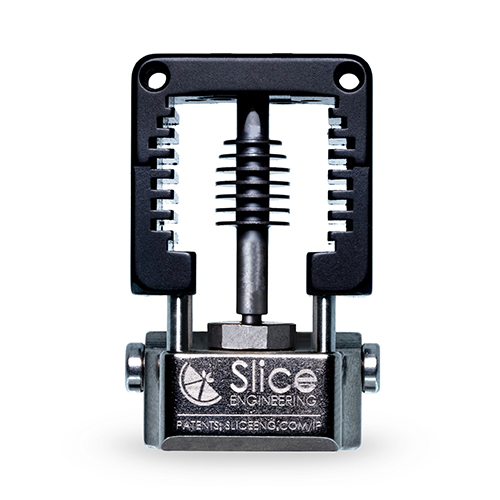 The V6 is the oldest extruder design of the three and has really stood the test of time. The V6 has the most accessories and almost every printer on the market is compatible out-of-the-box with this extruder. If you cannot natively install the V6 on your printer, then there is definitely an aftermarket bracket to help you.

The one notable issue with the extruder’s design is that it relies on the heat break as a structural member. It holds the hot and cold ends together. To prevent heat from spreading to the cold end you want the heat break to be as thin as possible, but this is not possible with V6’s design. If the heat break is too thin, then the V6 would snap if the extruder experienced any force during installation or when changing nozzles. Therefore, the V6’s heat break is quite thick and can suffer from heat creep (as discussed above).

While the “groovemount” of the V6 is widely accepted in the industry, it is difficult for the DIYer to design a mount that properly grabs onto the top of the extruder. Also, if not tightened down properly, the V6 can spin, which can stress the heater and thermistor wires. A rigid mount that uses threaded holes would make it much easier to build a custom printer around a V6.

Even with those drawbacks, the price of V6 is the most competitive, and it is the extruder I find myself using the most.

The Dragon solves the heat break problem of the V6 by having four insulated rods connect the cold end to the hot end, relieving any kind of mechanical pressure on the heat break. This allows for the heat break to have an ultra-thin wall thickness (~0.1mm), which virtually eliminates heat creep. Also, it is much easier to change nozzles because the rods keep the hot end from spinning, so the nozzle can be unscrewed without having to clamp the hot end. The dragon accepts the common V6 nozzles (reprap style), so there is plenty of diameters and hardened materials to choose from. However, the Dragon is a little bit more expensive than the V6. For mounting, the Dragon has the same groovemount as the V6 and can in almost all cases be swapped in for any V6.

The Mosquito is the most expensive of the three desgins. Similar to the dragon, the Mosquito also solves the heat break problem with four insulated rods, which allows for a thin heat break and also, quick changing of the nozzles. The Mosquito is 30% (~20mm) smaller than the V6 and dragon. These height savings give you additional Z clearance for taller prints. But my favorite feature, is the fixed mounting of this extruder. The Mosquito opted for tapped holes instead of the goovemount, so it can be simply bolted down.

It takes quite a bit of force to push molten filament out of a small nozzle that is a fraction of the size of the filament’s diameter. It is the extrusion drive’s job to convince the filament to go into the extruder out the other side.

The extrusion drive is powered by a stepper motor that either directly or indirectly drives a gear with ridges or teeth. These sharp features bite into the smooth but hard surface of the filament providing sufficient traction. A second hobbed gear or smooth bearing sits on the opposite side of the filament and confines the filament’s movement to up or down.

A stepper motor requires about 0.7 N-m of torque to properly drive the filament gear(s). Very few Nema17 motors have this kind of torque. A larger motor could be used, but heavier motors are not ideal because they can slow down the tool head if the extrusion drive is attached directly to the extruder (more on extrusion drive placement later). Therefore, most extrusion drives utilized a geared stepper motor to increase the torque output of a small “pancake” Nema17 motor. 3:1 and 5:1 are typical gear ratio used. Keep in mind that higher gear ratios will result in higher torque but also proportionally lower speeds. At some point your printer’s speed could be limited by the gearing of the stepper motor if you choose too high of a gear ratio.

With the bowden tube extrusion drive system the print head can accelerate and deaccelerate faster because the print carriage does not have the added weight of the extrusion drive. This can significantly speed up print time. The drawback for this setup is the distance between the hobbled gear that is pinching the filament and the hot end. The longer this distance the less responsive the filament extrusion will be. This hysteresis or lag is amplified when printing flexible filaments, so it’s best to avoid the bowden setup when you expect to print flexible parts.

For the direct drive extrusion system the pros and cons are swapped. You can’t accelerate and deaccelerate as quickly because the carriage has the added mass of the stepper motor but the extrusion and retraction of the filament is more responsive. I tend to always employ direct extrusion as the maintenance is minimal. Further, I tend to print at lower speeds anyways because part quality is always my highest priority.

There are a lot of different ways to successfully build a 3D printer, many of which are not covered on this website. If you want to learn more about FFF extruders, then click through some of the links below to external websites and forums.

1. An article comparing direct and bowden extrusion drive configurations. 2. An article looking at the wear resistance of nozzles.

The table below contains parts specific to this section that Dr. D-Flo uses and recommends. Depending on your printer build these parts may or may not be compatible. It is best to use the products below as a launching point to explore similar products on the linked websites. Affiliate links may be present below (depending on the vendor).